A rerun . . . This blog post is a rerun, just FYI. This week has been challenging for me, to put it mildly. How has your week been? I had planned to use this blog post rerun sometime during the Christmas season so – here it is! I pray you have a blessed week. Look for humor every day, keep actively trusting God and keep your mind fixed on Him and His Word! And remember: God is in control!  Psalm 135:5-6 says:

“I know that the Lord is great, that our Lord is greater than all gods. The Lord does whatever pleases Him, in the heavens and on the earth, in the seas and all their depths.”(NIV)

“It is Good Who sits above the circle (the horizon) of the earth, and its inhabitants are like grasshoppers; it is He Who stretches out the heavens like [gauze] curtains and spreads them out like a tent to dwell in. ” (Isaiah 40:22 (AMPC)

Beautiful mornings. From the vantage point of the interstate, heading into the hill country east of Austin, morning mist lingers in gossamer pockets formed by gently rolling hills visible all the way to the horizon. Just before daybreak, darkness still obscures more than

the growing light reveals, creating a sense of solitude. Six years ago, I drove into the hill country two mornings a week, sipping coffee from a go-mug, eagerly anticipating turning off the interstate onto a winding, unpaved road that ended at a house bordered on three sides by small pastures.

A bona fide city girl, with a life-long unsatisfied love of horses, I relished my part-time job doing light housekeeping for Rachel and caring for her two horses, this on the days I was not busy being Nana.

That morning, from her wheelchair by the big bay window Rachel looked out through the mist at the corral where a lone deer was grazing, and grazing on grass meant for the horses.

“Look at that deer!” Rachel harrumphed. “You just can’t get rid of ‘em!”

“You want me to go yell at them, Rachel?”

I stopped stirring the oatmeal, ran through the side door into the garage and burst through the outer door like a one-woman SWAT Team, albeit not nearly as fast.

Inspired by hard-riding cowboys. You have to remember that I grew up in the sixties, 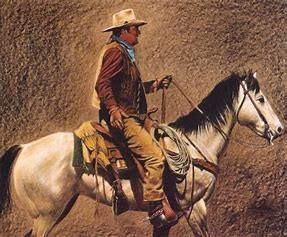 when Westerns ruled prime time television. My brothers and I laid on the floor in front of the television, with Daddy in his recliner, and watched every weekly episode of “Rawhide”, “Bonanza”, “Maverick”, and “The Big Valley”, to name just a few. Western TV shows and western movies, especially ones starring John Wayne, were better than ice cream. So, I had often seen cowboys waving their lariats and yelling, “Yeehaw!”.  It had worked for those hard-riding cowboys as they headed off strays or turned a stampeded herd.

With great intensity, as I ran toward the deer, I now attempted to duplicate that motion, flapping my long arms wildly, and widely, in place of a lariat.

Not my wisest move. Well, several things happened. They happened fast, they happened in slow motion, and they have remained forever frozen in my mind. First, that lone deer that Rachel had seen in front of the house jumped straight up and high-tailed it, literally, toward the larger pasture to the right of the barn and corral. 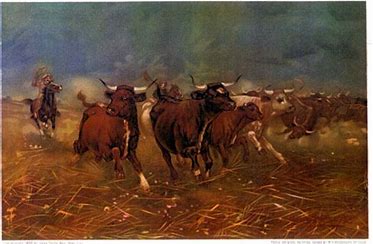 Second, in the same instant, both horses in that pasture also jumped but, thank the good and merciful Lord, did not bolt toward their fences. Now, the third thing is where things got interesting.

One of the sneaky deer who had been behind the house to the left, hidden from my view, munching on bushes next to the oak tree, leaped and soared within five feet of me on his way to the same pasture as the other one. Fourth, his or her companion, a bit slower by only a nose, ran behind me, this time within three feet of me. It was getting crowded, I guess, on the only pathway away from the obviously insane human.

Fifth, I stood still – for how long, I don’t know. As my racing heart slowed and my breath returned, I reflected on stories I had heard about encounters between vehicles and deer. I concluded that what I had just done was not the wisest move I had ever made.

Finally, still a bit shaky, I turned and went back inside, reflecting how often people had warned me about deer since I had moved to Texas. What would a full-steam ahead deer/human collision look like? Not so great for the human, I was sure.

Rachel and I got a good laugh, but I think about my close encounter when I see a deer or when I think about that 1979 song “Grandma Got Run Over by a Reindeer.” Only now I don’t laugh quite so much!